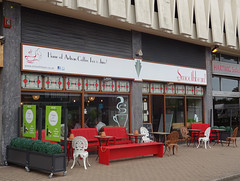 It sells coffees and teas, freshly-made juices and smoothies, cakes, hot and cold breakfasts (served 7:30am-11am, as of May 2017), and a small, daily-changing lunchtime menu (served noon-3pm, as of January 2016).

There's plenty of internal seating, plus outside seating in good weather.

Accessibility: Step-free throughout, including to the toilet.

The premises were previously occupied by a career and business advisor called Prevista LifeLine Centre photo, but some time between May 2012 and June 2013 this moved photo of sign to Robert Street. The units were vacant and advertised to let as of June 2013 photo.

As of June 2014, a sign in the window photo indicated that it would be opening soon as a coffee and juice shop called Smoothbean, offering "artisan coffee, ethically sourced tea, freshly made juices and smoothies, delicious savoury food [...and...] cakes and snacks." photo of frontage at this point Smoothbean was open by late July 2014.