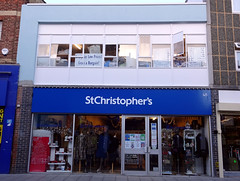 It has clothes on the ground floor, and bric-a-brac, music, films, books, electrical goods, and small furniture items on the first floor.

According to a photo on Flickr, as of c. 1985 the premises were occupied by Cavendish Newsagents/Cut Price Tobacconists.

A wedding shop called Bustles & Bows photo was in place by March 2012. It sold wedding dresses, plus trimmings such as ribbon, zips, and "stick-on bling", as well as sewing thread. The trimmings were on the ground floor and the dresses and shoes were on the first floor. It closed some time between September 2013 and November 2013 photo as of November 2013. According to the Bustles & Bows website, they have moved to become Amoria Bridal, 17 Quarry Hill Road, Tonbridge, Kent.

As of December 2013, signs in the windows of the Church Street premises photo indicated that the next occupant wwould be a St Christopher's charity shop, opening at 11am on Monday 16 December.