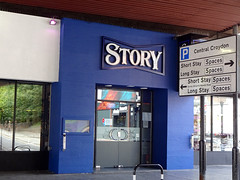 Club on the High Street, located in a basement under the flyover.

It was previously an "Italian tapas" bar called Cantina photo, with the same owners as Ponte Nuovo and Caffe Del Ponte next door. This closed some time between October 2013 and February 2015.

See also: photos of Cantina flyer from February 2013: front, back