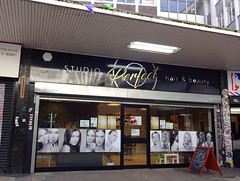 It was previously a hairdressers and beauty salon called Studio Perfect, incorporating a massage studio called Croydon Therapy 4 You, but in August or September 2018 this moved temporarily to Touch & Beauty at 22 Surrey Street due to redevelopment of the entire block photo of notice. By November 2018 it had moved again to 181a North End.

It was previously a cafe called Zenith Candies photo, which closed in Spring 2013. (As of May 2012, their frontage advertised "tea & coffee, jumbo hot dog, mini-donuts, milkshakes, frozen yogurt, ice cream, smoothies" and burgers.)

The unit was vacant as of May 2013 photo. As of June 2013, it was in the process of being refitted as a Polish grocery shop called Groszek photo, and by July 2013 this had opened photo. It closed again some time between May 2017 and March 2017.

In early 2017 a hairdressers and beauty salon called Studio Perfect opened photo. The last time we saw this open was in October 2017, though it might have lasted longer. In any case, by October 2018 the premises were vacant again and had a notice photo stating that Croydon Therapy 4 You (which was previously a massage studio inside Studio Perfect) had moved to Touch & Beauty at 22 Surrey Street. We aren't sure what happened to the hair and beauty side.