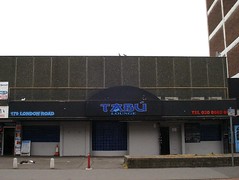 Nightclub premises on London Road, vacant as of mid-2016. Still vacant (and now boarded up) as of December 2019.

It was previously open as Tabu Lounge, but this closed down at some point probably in 2014 or 2015.

Tabu Lounge opened in November 2012 on a site previously occupied by several other clubs including Top Rank, Cool Rooms, The Cartoon, Watertown, and The Club photo.

During at least part of its life, it was also open as a bar in the daytime.

As of May 2014, there was a Caribbean takeaway in the basement open Tuesday-Saturday 10am-8pm photo of sign.