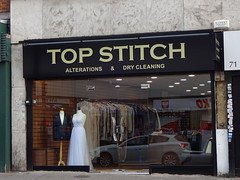 Alterations and dry cleaning shop on the High Street. It was previously up the road at number 15, but moved here in September 2018 due to the St George's Walk redevelopments.

It was previously a burger and fried chicken takeaway called Roosters Chicken photo, which also had a few seats for eat-in. According to the frontage as of July 2012, this was halal. It closed down some time in 2015 or 2016.