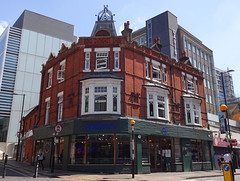 Board games cafe on the High Street. It opened in November 2017.

As of October 2010 it was a bar called Bar Red Square photo. This had closed by August 2012, with the windows whitewashed over photo and a sign in the window photo indicating that a restaurant called La Rochelle would be opening there soon.

La Rochelle opened some time around the end of October/start of November 2012. According to the Croydon Advertiser, the owner previously ran two other French restaurants in Croydon; Le Bien Manger (at 103-105 High Street) and Jardin de Provence (at 40-42 South End).

La Rochelle closed some time between February 2013 and May 2013. As of May 2013 there were signs up in the windows photo indicating that it would be opening soon as R&R's Lounge Bar.

R&R's photo opened some time between May and July 2013. As of August 2013 it did light meals only (sandwiches, wraps, and jacket potatoes) but by October 2013 it was also offering curry-based hot food (as well as burgers and panini). During October 2013 the menus in the windows were rebranded as Chilli Corner, though the name on the frontage didn't change.

As of July 2015, the Croydon Advertiser reported that there were plans to open a burger restaurant called Moj Y Moj here by November 2015. As of late November, this hadn't happened yet, but some work had been done on the building photo. As of December 2015 the new sign had gone up photo.

Moj Y Moj photo was open by late January 2016, serving halal burgers and paratha rolls including vegetarian options. It also did takeaway and delivery, with online ordering via Deliveroo.

Moj Y Moj closed down some time between April and October 2016.

A buffet restaurant called Comboco photo opened in October or November 2016, but had closed down again by late November. It claimed to be temporarily closed for refurbishment, and promised to be open again soon, but this never happened.

As of November 2016 it cost £5 for one visit to the buffet and £8 for multiple visits. The food was a sort of mixture of Indian and Italian. Examples of hot dishes were spiced chicken on the bone, dal, pilau rice, lasagne, and pasta in tomato sauce; and examples of cold dishes were lentil salad, kidney bean and sweetcorn salad, coleslaw, olives, and pasta salad.

A pizza restaurant called Pizza Ora photo opened in January 2017, but closed down some time between May and August 2017.