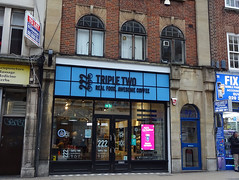 Cafe and coffee shop on George Street, part of a small chain. It opened on 13 November 2018.

Accessibility: No steps to get in, and no steps to the accessible toilet. One step to the other toilets.

It was previously a fashion accessories and wedding dress shop called Bonita photo, but this closed down some time between September 2016 and January 2017 photo. According to a photo on Flickr, it had been Bonita since at least July 2009.

As of October 2018 it was still vacant but under refurbishment to become a branch of Triple Two Coffee. This opened on 13 November 2018.