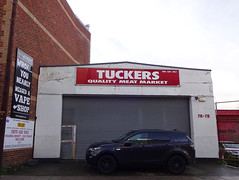 It was previously a butchers called Tuckers Meat Market photo, but this closed down around the end of 2016/start of 2017.

According to a photo on Flickr, as of December 1990 the premises were occupied by Hearn & Sons Meat Centre/Cash & Carry.

By July 2009 it was Tuckers Meat Market photo. Unlike many of Croydon's other butchers at the time, this was not halal, and hence sold pork as well as other meats. As of August 2012 they accepted card payments with a minimum spend of £5. It closed down around the end of 2016/start of 2017.