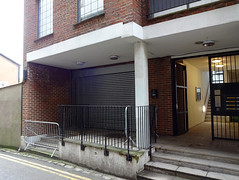 It was previously an African and Caribbean supermarket known as "Alfi Afro" aka "Alfred's Afro Store" photo and then Cape Coast Market photo (with the name change occuring some time between July 2012 and October 2013). As of April 2015 this moved to 81 Church Street and was renamed to Alfie De Alfie.

As of October 2013, the frontage also advertised money transfer and phone cards.