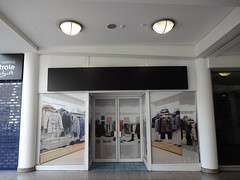 Retail unit on the lower level of the Whitgift Centre.

Vacant as of May 2012, with signage indicating that it used to be a homewares shop called Home Express photo.