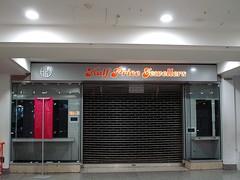 Retail unit on the lower level of the Whitgift Centre.

Vacant as of July 2012, with signage indicating that it was previously occupied by a jewellery shop called Half Price Jewellers.