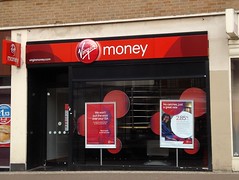 According to a member of staff as of December 2019, although there's an upcoming merger with Clydesdale Bank, the branch will not be rebranding.

Northern Rock had been there since at least August 2007 photo. Along with the rest of the Northern Rock branches, it changed to Virgin Money some time in 2012.
Existence last checked in December 2019.
Wellesley Road ...