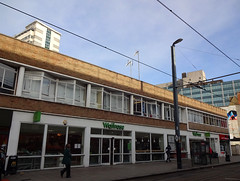 It has a wet fish counter.

According to Google Street View, as of August 2008 it was Somerfield, and occupied all the current frontages (numbers 24-27).