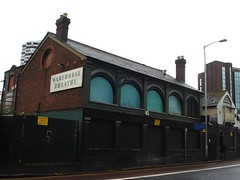 As of March 2013, the premises had been stripped out completely. The building was demolished in October 2013.