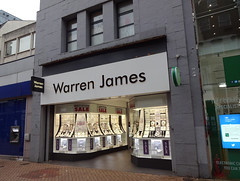 As of December 2011, the premises were occupied by a branch of Shoe Zone photo. As of August 2012, Shoe Zone had "closing down" signs in the window photo, though it didn't actually close until some time in November/December 2012. The Shoe Zone branch on Church Street remained open.

Linvi (also a shoe shop) opened in Shoe Zone's place in January 2013, though for some time afterwards it didn't actually have a sign up photo. By April 2013 it did have a sign photo. Linvi closed again some time between April and October 2013 photo. (It's perhaps of interest to note that there was another branch of Linvi across the road at number 104 for a few months in late 2012, though that one didn't last long either.)

A clothes shop opened on the site on 5 October 2013, though the Linvi signage remained up photo and the staff didn't know what the name of the new shop was going to be. By mid-November 2013 the old signage had been removed, but nothing had been put up in its place photo. However later that month a sign appeared reading "Fashionezia" photo. As of November 2013 it had an A-board outside photo advertising eyebrow threading, and a sign in the window stating "Beautician Wanted".

In February 2014, planning permission was granted for a branch of Warren James jewellery shop.

Fashionezia closed in April or May 2014 photo. As of late May 2014 there were newspapers up in the windows photo as well as building site health and safety notices.