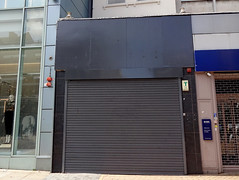 Business premises on North End, vacant as of August 2019.

It was previously a branch of the Thorntons chocolate shop chain, which opened on Monday 25 November 2013 photo. However this closed down again some time between May and August 2019.

The premises were previously occupied by a shop called Just Leathers photo. As of April 2012, it was vacant, with a sign photo asking that post be redirected to Vibe, across the road.

As of January 2013 there was building work going on inside photo, though according to the construction workers it would be a good while before it reopens, and they weren't sure what (if anything) it was planned to be. As of April 2013 it was still under refurbishment.