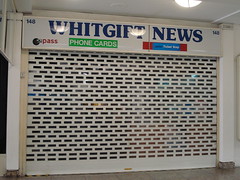 Previously occupied by a newsagent and sweet shop called Whitgift News photo, but this closed some time between September 2013 and July 2014.