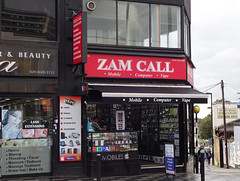 As of December 2011, a board outside advertises "2nd user phones bought and sold" as well as mobile phone repairs, while a board inside advertises watch repairs.