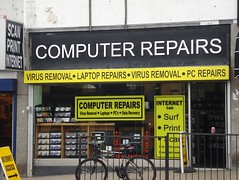 As of October 2014 the "Computer Repairs" sign has been replaced by one reading "071" photo. We're not yet sure if this signifies a permanent change of name.