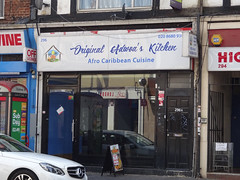 By July 2013 this had been replaced by a Caribbean restaurant and bar called RG Caribbean Cuisine photo. This closed down again in March or early April 2017 photo.

By April 2018 it was a Ghanaian and Caribbean restaurant called Original Adwoa's Kitchen, which judging by information from Google Street View and Companies House seemed to have moved here from 35 Whitehorse Lane. This also did takeaway and delivery, with online ordering via Just Eat.

Adwoa's was still open when we went past in early December 2019, but by the end of the month it had closed. Someone who was inside when we discovered it had closed (seemingly connected with the business) told us that it was still open on Whitehorse Road. Later investigation via Google Street View showed that as of October 2020, 314 Whitehorse Road had a frontage reading "Original Adowa's [sic] Kitchen", while imagery from May 2019 instead showed Double Egg Cafe.