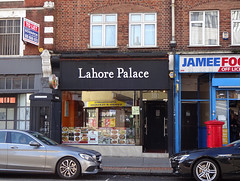 Pakistani restaurant on the High Street. It opened in September or October 2019.

The premises were previously occupied by a hair and beauty salon called Classic Parlour photo. Classic Parlour opened some time around spring 2012, but had closed by March 2013.

By July 2013 it was a halal pizza place called Frenzy photo, but this closed some time between April and November 2014.

A Tex-Mex restaurant called KK's Texan Grill House photo opened in late 2014, with online ordering via Deliveroo, but this closed down by September 2019.

The premises were vacant as of September 2019 but with a notice in the window saying a restaurant called Lahore Palace would be opening soon. This was open by late October.