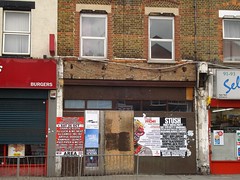 Vacant and boarded up as of July 2012 photo.