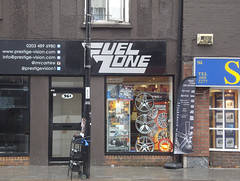 Business premises on South End, vacant as of December 2019.

It's not entirely clear how the interior is divided up. Although for much or possibly all of the 2010s there were two separate shopfront signs, often with separate street numbers (96a and 96b), the two sides seemed to share an entrance door in the centre.

As of July 2012 the left-hand side had signage for a tax and accountancy firm called Keepers photo, but it wasn't clear whether this was still operating. The right-hand side was clearly vacant, with signage indicating it was previously occupied by a business called MSC or Modern Sports Classics photo.

By October 2013 photo the MSC signage had reappeared over the left-hand side. The right-hand side now had a sign for something called Southend Enterprise, though this seemed to have closed down as it also had a notice stating that the shop was for rent on "flexible terms".

As of April 2014 the left-hand side had signage for Prestige Vision car hire photo, though the Prestige Vision website stated that the company was actually based in Swanley, Kent. The right-hand side was being used as a private workspace; although the Southend Enterprise sign was still up, the person working inside told us that none of the advertised services were available.

A car parts/accessories shop called Fuel Zone opened in the right-hand side some time between April and November 2014 photo. This remained open until at least July 2015.

The left-hand side was definitely vacant as of September 2016 and October 2017. As of December 2019, both sides are vacant.