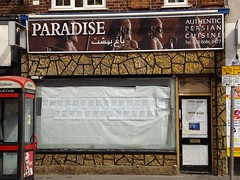 Note: As of August 2012 it's closed, with signs in the window stating "opening soon / redecoration / under new management". It's not clear whether it will still be the same type of restaurant when it reopens.

Previously called Paradise Garden, and before that Paradise Island (at which point it was a Mauritian restaurant).