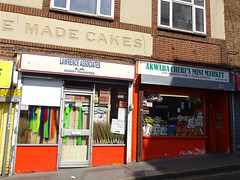 Note: As of early August 2018, Akwaba Cheri's is preparing to move to 38 London Road photo of notice. The Mead Place location seems to have closed although the London Road one isn't quite finished yet.