(redirected from All About Me, 65 Whitgift Centre)
streetmap osm gmap streetview 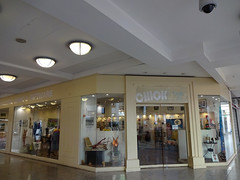 All About Me (CLOSED), 65 Whitgift Centre

All About Me (CLOSED), 65 Whitgift Centre

It was previously a pop-up boutique called All About Me, stocking handmade goods and providing retail experience to people with disabilities. This ran for eight weeks in total, ending on Friday 15 November 2019.

The unit was vacant as of July 2012, with signage indicating it was previously a branch of Past Times, and a note on the door photo stating that Past Times went into adminstration in January 2012. It was still vacant as of June 2013 photo.

A branch of the Chickidee gifts and homewares chain opened here in August 2013. As of March 2019 Chickidee was advertising a closing-down sale, and by August 2019 it had closed.