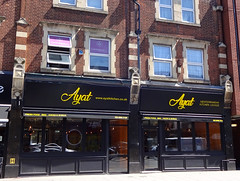 It was previously an Italian restaurant called Obia, which opened some time around the end of 2017/start of 2018. However, in September 2018 a notice appeared on its Facebook page stating that it was closed for refurbishment, and as of February 2019 it remains closed, with the name removed from the frontage and the windows papered over.

As of early December 2017 it was vacant, but with signs in the windows indicating that a bar and grill called Obia would be opening soon photo.