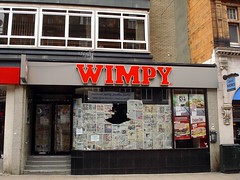 Business premises on George Street, vacant as of June 2013.

It was previously occupied by a branch of Wimpy burger restaurant photo, but as of May 2013 this was closed for refurbishment, with notices in the window photo stating that the refurb would take a total of three weeks. In June 2013 a notice photo appeared stating that the landlord had taken possession of the property due to "a breach of covenant by the Tenant".