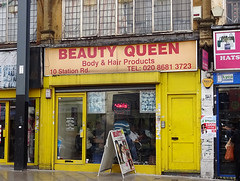 Beauty salon and hairdressers on Station Road, near West Croydon Station. According to the Croydon Advertiser, as of January 2013 it's been there for 15 years.

According to a photo on Flickr, as of c. 1985 the premises were occupied by a business called Ardente Hearing Services. According to another, as of 1989 it was Hidden Hearing Limited (advertising "the world's tiniest hearing aids"); and according to yet another, the Hidden Hearing sign was still there in June 1999.
Existence last checked in June 2018.
Station Road ...