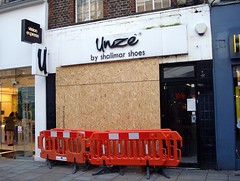 Business premises on North End, vacant as of November 2013.

It was previously occupied by a shoe shop called Unze By Shalimar Shoes photo, but this closed some time in October or early November 2013 photo. By mid-November the interior was stripped out photo and by late March 2014 it was boarded up (pictured).