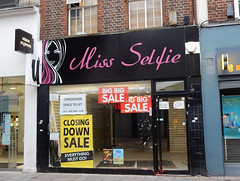 A new clothes shop opened in July 2014, initially with no name on the frontage photo but the owner told us he was thinking of calling it "Miss Selfie". By August of the year it had a proper sign up photo. It closed down again some time between July and September 2015.