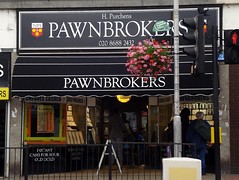 Business premises on North End near West Croydon Station, vacant as of August 2015. It was previously a pawnbroker and jewellery shop called H Purchen. Still vacant as of December 2015.

As of early January 2016 there's some sort of building or shopfitting work going on inside.

It was H Purchen pawnbrokers by 1967 (see London Road History article). This closed down in late July or early August 2015 — as of July there were signs in the windows indicating a closing-down sale, and by August the shutters were down every time we walked past.