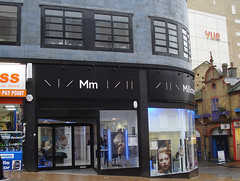 Hairdressers at the Crown Hill end of Church Street. It opened as Marco Aldany photo some time in August or September 2012, and rebranded to Millimetre (Mm) in October 2014.