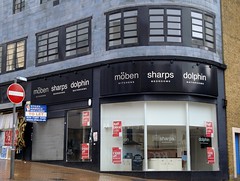 Business premises at the Crown Hill end of Church Street.

It was vacant and advertised to let as of July 2012, but as of August 2012 it's being fitted out to open as a new branch of Marco Aldany hairdressers.

The premises were previously occupied by Möben/Sharps/Dolphin (Homeform Group), which went into administration and closed its Croydon showroom in June 2011.