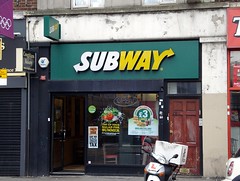 Business premises on the High Street, vacant as of October 2017.

It was previously a branch of Subway photo, but this closed down some time between March and October 2017 photo of notice.

As of October 2013 it was all closed up with a sign in the window photo stating that it was temporarily closed due to "a fire burn incident", and it remained closed as of January 2014. However, as of April 2014 it was open again.
High Street ...