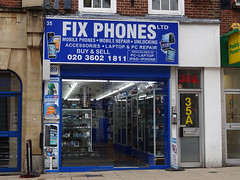 It was previously a branch of Tate recruitment agency photo. As of August 2012, there was a sign in the window photo stating that "the office is now closed due to staff training". It wasn't clear when (or if) it would reopen. As of June 2013 the premises had been (mostly) stripped out and the Croydon branch was no longer listed on the Tate website.

As of April 2015 it appeared to be reopening as some kind of mobile phone accessories shop, though there was no name on the frontage yet. By May 2015 it was open as Fix Phones Ltd photo