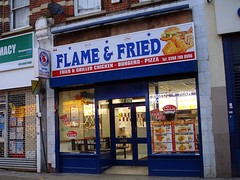 Fried chicken, pizza, and burger takeaway on Church Street. Previously (up to December 2012 at least) known as Chicken Inn photo.

There are a couple of tables for eat-in, seating around 12 people in total. In their previous incarnation as Chicken Inn, they also did delivery and online ordering, but the new version doesn't seem to have appeared on the usual online ordering websites yet (as of mid-February 2013).

According to a sign on the frontage as of February 2013, they are halal.

According to a photo on Flickr, as of December 1990 the premises were occupied by a butchers called R Tucker. (It's possible that this has some connection with the current Tuckers Meat Market on Frith Road, particularly since according to debit card receipts the banking name of Tuckers is "RJT").
Existence last checked in February 2013.
Church Street ...