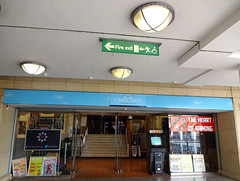 Retail unit, part of what used to be Allders, on the upper level of the Whitgift Centre.

Around 2017-2019 it was occupied by an amusement arcade (Heart of Gaming) and gaming/videogames shop (Playnation Games), but in mid-2019 these were forced to move to another part of the Whitgift Centre at 42-46 North End due to repossession of the ex-Allders premises.

Heart of Games opened in April 2017, and in mid-2018 Playnation Games moved over from its previous location at 17 High Street to join it.