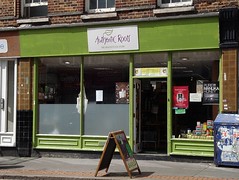 Note: According to a customer posting on Twitter, as of November 2013 Authentic Roots may have closed. We haven't yet confirmed whether this is permanent.

Previously known as Oasis Natural Products, it was taken over by new owners in early 2011.

It has an Ecover refill station, which as of August 2013 does refills for washing up liquid, laundry liquid, and fabric softener.