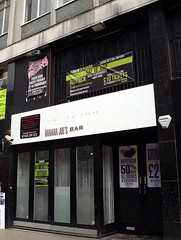 As of August 2013 there's a notice up outside photo stating that a licence application has been made for sale of alcohol, live music, recorded music, dancing, DJ, and karaoke at this address under the name "Pals".

Until late 2012 this was Banana Joe's Bar (which was possibly connected to the Roxbury next door in some way). However as of December 2012 there's a notice on the door photo stating that the premises have been repossessed by bailiffs.