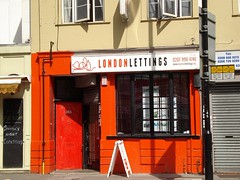 Business premises on the High Street. As of July 2017 it's vacant and filled with rubbish. Still vacant as of October 2017.

It was previously an estate agents called London Lettings, but this closed down some time in 2016 or 2017.

Previously a computer and mobile phone sales and repair place called Global PC Clinic (see photos of flyer from summer 2012: 1, 2). Some time between February 2013 and July 2013, Global PC Clinic closed down and London Lettings opened up, but the latter closed down again by July 2017.
High Street ...