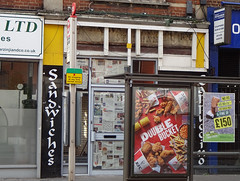 It was previously a cafe called Malaika's photo, but this closed down, probably in the first half of 2017.

It was previously known as Panini Cafe photo, but had a change of name (to Malaika's) and management in late 2016 or early 2017.

As of early March 2017, it operated solely as a daytime British cafe as before, but there were plans to also start opening in the evenings to serve East African food. We don't know if this ever happened.

The last time we saw it open was in March 2017. When we went past in early December 2017, the main sign had come down photo and been stashed inside along with ladders and things photo.