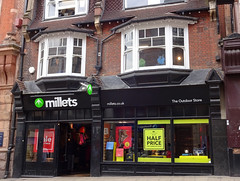 Camping, hiking, and other outdoor pursuits shop on the High Street.

According to Google Street View, the premises were occupied by Blacks (a sub-brand of Millets) as of July 2009. As of mid-2012 it was vacant photo with a sign in the window from Blacks stating that Millets at 50-54 High Street was "your nearest store". As of September 2013 there were signs in the window photo stating that Blacks would be opening there again soon, and by early October 2013, Blacks was indeed open again photo.

Blacks remained here until May 2017, at which point it was replaced by Millets, which moved here from its previous location.