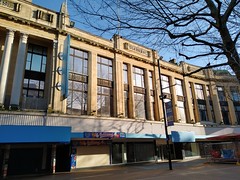 As of mid-July 2019 it's been repossessed by Croydon Council and is currently closed. Still closed as of December 2019.