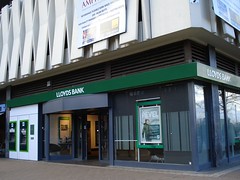 Bank on the corner of Dingwall Road and George Street, near East Croydon Station, with two external cashpoints.

Previously branded as Lloyds TSB photo, it rebranded to Lloyds Bank some time between June and October 2013.

According to Google Street View, it's been there since at least August 2008 (under the name Lloyds TSB).
Existence last checked in May 2016.
Dingwall Road