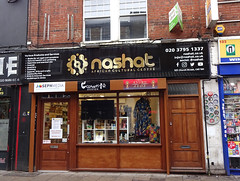 African cultural centre and shop on Church Street. It sells books, clothes, art, health food, jewellery, and so on, and also has space for community events and classes.

The premises remained vacant as of November 2014, April 2015, and May 2017. Still vacant as of October 2017, but a new shopfront appeared to be in process photo. Nothing obvious had changed as of November 2017. When we went past in March 2018, there was still no sign on the shopfront, and the shutter was down. Still nothing happening as of June 2018 or April 2019.

By mid-September 2019, it was open again as Nashat African Cultural Centre.