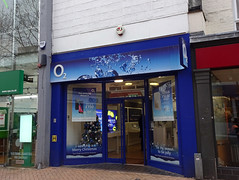 The building was once the entrance hall of the Prince's Picture House cinema, which was open between 1921 and 1929. The old dome of the cinema entrance is still there above the shop photo.

According to a photo on Flickr, as of c. 1985 the premises were occupied by a shop called Elite Fashion Shops (see also a photo from December 1990).