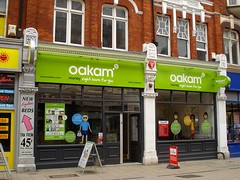 Business premises on George Street, vacant as of October 2018.

It was previously a branch of the Oakam payday loan, cheque cashing, and money transfer chain (which according to the Oakam website originally opened on 5 May 2010), but this closed down some time between June and October 2018 photo of notice.

According to the Croydon Advertiser, it's due to become a branch of Creams dessert parlour.