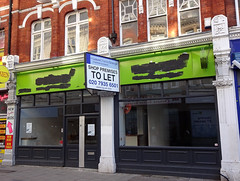 According to the Croydon Advertiser, it has planning permission to become a branch of Creams dessert parlour, but as of December 2018 it's unclear whether this is still happening.